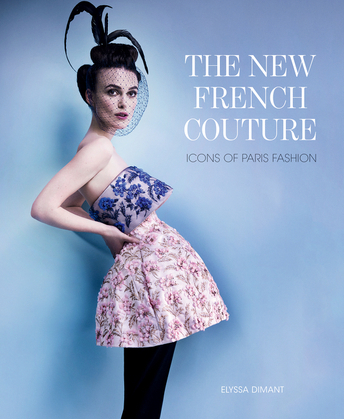 A gorgeous, groundbreaking survey of the evolution of the world’s renowned French ateliers, from the vision of their founding designers to those today who both preserve the signature iconographies and bring their own interpretations to bear on modern couture fashion.

The world awaits Paris’s flawless fashion presentations year after year, just as the evolutionary arc of French fashion grows richer with each season and each new talent. The New French Couture identifies those fashion leaders whose long-standing ateliers have persevered, and whose current creative pioneers continue to reinvent the signature iconographies upon which each house was founded. Saint Laurent, Dior, Chanel, Lanvin, Givenchy, Hermès, Louis Vuitton, and Balenciaga have all made undeniable contributions to fashion, both historically and today, through their distinct and potent visions.

With more than two hundred images by fashion’s top photographers, this beautifully designed volume provides an exclusive tour through the evolutions of these eight ateliers, revealing each brand via an encapsulated history of definitive looks and fashion moments. Fashion icon and blogger Leandra Medine contributes to an exposition that highlights designers who have carved out new visions for French luxury in the contemporary era, including Christian Lacroix, Jean Paul Gaultier, Céline, Rick Owens, Alexander
McQueen, Hussein Chalayan, Azzedine Alaïa, Comme des Garçons, and Yohji Yamamoto, among others.

The New French Couture is a comprehensive survey of the revolutionary creative talents who are bringing their genius to bear on the City of Light today via the ateliers that have defined and defended fashion for nearly a century.