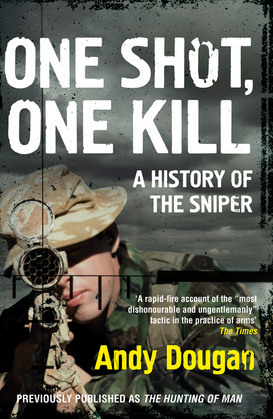 One Shot, One Kill: A History of the Sniper

Previously published as The Hunting of Man

One shot, one kill: a cultural and military history of the sniper since 1643, when the first shot was fired by a sniper during the battle for Litchfield in the English Civil War, to the present day, when the sniper has become the embodiment of contemporary military strategy and technology.

Since Robert Greville, Lord Brooke, commander of the Parliamentarian forces, was struck in the eye by a marksman positioned on the spire of Litchfield cathedral, the story of the sniper has been one of the gradual empowerment of the individual soldier over the massed battalions. As military technology evolved to produce lighter, and quieter firearms that could strike with accuracy over longer and longer distances, so the role of the talented individual marksman has become more central to the outcome of military conflicts.

Andy Dougan tells the story of the sniper as seen in the wars of Vietnam, the first and Second World Wars, the American Civil War, the Boer War and European conflicts and up to the present day when the sniper is not only a battlefield phenomenon but a terrorist in civilian society of almost phantom-like elusiveness.

In three hundred and fifty years the history of the sniper has, more than any other military history, been the story of individuals: of high-profile victims such as the Union General Sedgwick, whose legendary last words were 'They couldn't hit an elephant at this distance' to the celebrated shooters. Sniping has more mythology than any other aspect of warfare, more mystery too. Because the sniper does not participate in a war fought between huge killing machines at great remove from their victims. With the sniper, there is selection, identification and deliberate execution. In short, it's personal.

Andy Dougan, author of Dynamo, has written an engrossing human history of the men and women who have taken up the gun to expert and deadly effect.