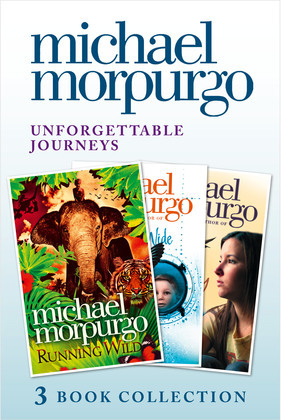 by Michael Morpurgo (Author)
Excerpt
Fiction Juvenile & young adult
warning_amber
One or more licenses for this book have been acquired by your organisation details
EPUB
26 loans, One at a time
Details

Three unforgettable life-affirming journeys from the nation’s favourite storyteller to capture your heart.

‘Alone on a Wide Wide Sea’:
How far would you go to find yourself? When orphaned Arthur Hobhouse is shipped to Australia after WWII he loses his sister, his country and everything he knows. Now, at the end of his life, Arthur has built a special boat for his daughter Allie, whose love of the sea is as strong and as vital as her father's. Now Allie has a boat that will take her to England solo, across the world's roughest seas, in search of her father's long-lost sister… Will the threads of Arthur's life finally come together?

‘Running Wild’:
An epic and heart-rending jungle adventure. For Will and his mother, going to Indonesia isn't just a holiday. It's an escape. But when Will is riding an elephant called Oona moments before the tsunami comes crashing in, it’s up to Oona to get them away as fast as possible. But she doesn’t stop. With nothing on his back but a shirt and nothing to sustain him but a bottle of water, Will must learn to survive deep in the jungle. Luckily, though, he's not completely alone… He's got Oona.

‘Dear Olly’:
A moving story of a brother, a sister and… a swallow and how all are in some way victims of the horrors of landmines. Three separate stories are woven into one powerful and moving novel whose central theme exposes the horrors of war and of landmines, but also the endurance of the human spirit.