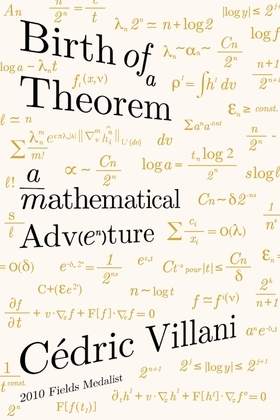 Birth of a Theorem

In 2010, French mathematician Cédric Villani received the Fields Medal, the most coveted prize in mathematics, in recognition of a proof which he devised with his close collaborator Clément Mouhot to explain one of the most surprising theories in classical physics. Birth of a Theorem is Villani's own account of the years leading up to the award. It invites readers inside the mind of a great mathematician as he wrestles with the most important work of his career.
But you don't have to understand nonlinear Landau damping to love Birth of a Theorem. It doesn't simplify or overexplain; rather, it invites readers into collaboration. Villani's diaries, emails, and musings enmesh you in the process of discovery. You join him in unproductive lulls and late-night breakthroughs. You're privy to the dining-hall conversations at the world's greatest research institutions. Villani shares his favorite songs, his love of manga, and the imaginative stories he tells his children. In mathematics, as in any creative work, it is the thinker's whole life that propels discovery?and with Birth of a Theorem, Cédric Villani welcomes you into his.