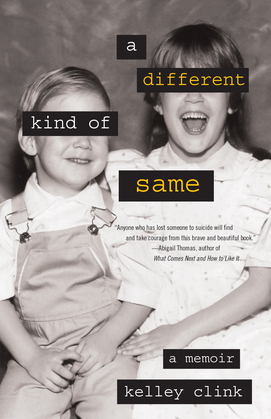 A Different Kind of Same

Two weeks before his college graduation, Kelley Clink’s younger brother died by suicide. Though he’d been diagnosed with bipolar disorder as a teenager and had attempted suicide once before, the news came as a shock—and it sent Kelley into a spiral of guilt and grief.

After Matt’s death, a chasm opened between the brother Kelley had known and the brother she’d buried. She kept telling herself she couldn’t understand why he’d done it—but the truth was, she could. Several years before he’d been diagnosed with bipolar disorder, she’d been diagnosed with depression. Several years before he first attempted suicide by overdose, she had attempted suicide by overdose. She’d blazed the trail he’d followed. If he couldn’t make it, what hope was there for her?

A Different Kind of Same traces Kelley’s journey through grief, her investigation into the role her own depression played in her brother’s death, and, ultimately, her path toward acceptance, forgiveness, resilience, and love.