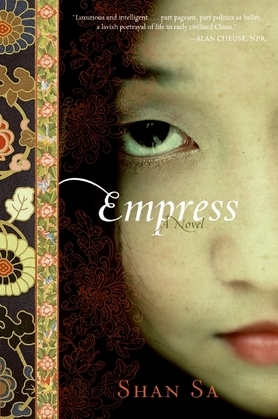 Such is the voice of Shan Sa's unforgettable heroine in her latest literary masterpiece, Empress. Empress Wu, one of China's most controversial figures, was its first and only female emperor, who emerged in the seventh century during the great Tang Dynasty and ushered in a golden age. Throughout history, her name has been defamed and her story distorted by those taking vengeance on a woman who dared to become emperor. But now, for the first time in thirteen centuries, Empress Wu (or Heavenlight, as we come to know her) flings open the gates of the Forbidden City and tells her own astonishing tale—revealing a fascinating, complex figure who in many ways remains modern to this day.

Writing with epic assurance, poetry, and vivid historic detail, Shan Sa plumbs the psychological and philosophical depths of what it means to be a striving mortal in a tumultuous, power-hungry world. Empress is a great literary feat and a revelation for the ages.