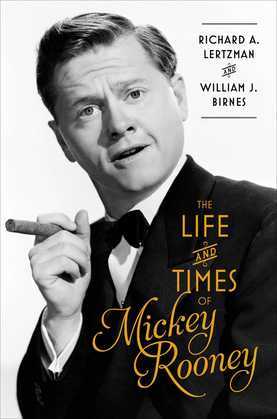 The Life and Times of Mickey Rooney

A definitive biography of the iconic actor and Hollywood legend Mickey Rooney (1920-2014) and his extravagant, sometimes tawdry life, drawing on exclusive interviews, and with those who knew him best, including his heretofore unknown mistress of sixty years.

“I lived like a rock star,” said Mickey Rooney. “I had all I ever wanted, from Lana Turner and Joan Crawford to every starlet in Hollywood, and then some. They were mine to have. Ava [Gardner] was the best. I screwed up my life. I pissed away millions. I was #1, the biggest star in the world.”

Mickey Rooney began his career almost a century ago as a one-year-old performer in burlesque and stamped his mark in vaudeville, silent films, talking films, Broadway, and television. He acted in his final motion picture just weeks before he died at age ninety-three. He was an iconic presence in movies, the poster boy for American youth in the idyllic small-town 1930s. Yet, by World War II, Mickey Rooney had become frozen in time. A perpetual teenager in an aging body, he was an anachronism by the time he hit his forties. His child-star status haunted him as the gilded safety net of Hollywood fell away, and he was forced to find support anywhere he could, including affairs with beautiful women, multiple marriages, alcohol, and drugs.

In The Life and Times of Mickey Rooney, authors Richard A. Lertzman and William J. Birnes present Mickey’s nearly century-long career within the context of America's changing entertainment and social landscape. They chronicle his life story using little-known interviews with the star himself, his children, his former coauthor Roger Kahn, collaborator Arthur Marx, and costar Margaret O’Brien. This Old Hollywood biography presents Mickey Rooney from every angle, revealing the man Laurence Olivier once dubbed “the best there has ever been.”