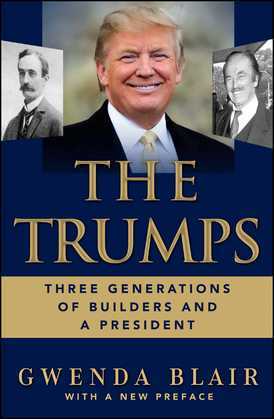 The Trumps: Three Generations of Builders and a Presidential Candidate

by Gwenda Blair (Author)
Excerpt
Nonfiction Business & economics
warning_amber
One or more licenses for this book have been acquired by your organisation details
EPUB
Unlimited loans, 2 years, One at a time
Details

The revealing story of the Trumps mirrors America’s transformation from a land of striving immigrants to a world in which the aura of wealth alone can guarantee a fortune. The Trumps begins with a portrait of President Trump’s immigrant grandfather, who as a young man built hotels for miners in Alaska during the Klondike gold rush. His son, Fred, took advantage of the New Deal, using government subsidies and loopholes to construct hugely successful housing developments in the 1940s and 1950s. The profits from Fred’s enterprises paved the way for President Trump’s roller-coaster ride through the 1980s and 1990s into the new century.

With his talent for extravagant exaggeration—he calls it “truthful hyperbole”—President Trump turned the deal-making know-how of his forebears into an art form. By placing this much-publicized life within the context of family, Gwenda Blair adds a new dimension to the larger-than-life figure who ascended to the American Presidency.