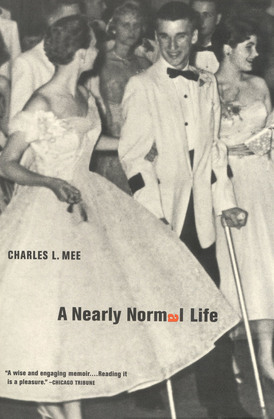 by Charles L. Mee (Author)
Excerpt
Nonfiction Biography & autobiography Medical Social science Social work Literary
warning_amber
One or more licenses for this book have been acquired by your organisation details

In the summer of 1953 the author was a carefree, athletic boy of fourteen. But after he collapsed during a school dance one night, he was suddenly bedridden, drifting in & out of consciousness, as his body disintegrated into a shadow of its former self. He had been stricken with spinal polio. When he emerged from the grip of the disease, he was confronted with a life change so enormous that it challenged all he had believed in & forced him, despite his young age, to redefine himself. His once stereotypically normal life, filled with baseball & swimming pools & dreams of girls, had been irreversibly altered. He was almost the same person he had been; he was nearly normal. His moving personal narrative is a textured portrait of life in the fifties - a time when America & her fighting spirit collided with this disease. Both funny & profound, he is a gifted, unique writer, who unravels the mysteries of youth in a Cold War climate, who gives voice to the mind of a child with a potentially fatal disease, & whose recognition of himself as a disabled outsider heightens his brilliant talents as a storyteller.