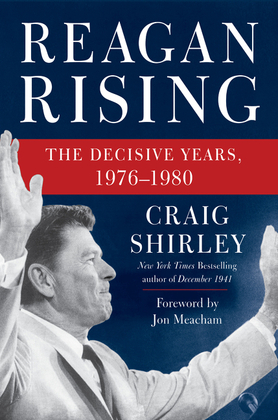 by Craig Shirley (Author)
Excerpt
Nonfiction History History by country United States
warning_amber
One or more licenses for this book have been acquired by your organisation details
EPUB
26 loans, One at a time
Details

With a Foreword by Jon Meacham

In 1976, when Ronald Reagan lost his second bid for the GOP presidential nomination (the first was in 1968), most observers believed his political career was over. Yet one year later, at the annual Conservative Political Action Conference, Reagan sounded like a new man. He introduced conservatives to a "New Republican Party"—one that looked beyond the traditional country club and corporate boardroom base to embrace "the man and woman in the factories . . . the farmer . . . the cop on the beat. Our party," Reagan said, "must be the party of the individual. It must not sell out the individual to cater to the group."

But it was not only the former governor's political philosophy that was changing. A new man was emerging as well: The angry anticommunist was evolving into a more reflective, thoughtful, hopeful, and more spiritual leader. Championing the individual at home, rejecting containment and détente abroad, and advocating for the defeat of Soviet communism, his appeal crossed party lines.

At a time when conservatives are seeking to redefine their identity in light of the Donald Trump phenomenon, Reagan Rising offers insight into the development of Reagan’s optimistic and unifying philosophy, and offers lessons for both established Republican leaders as well as emerging hopefuls.