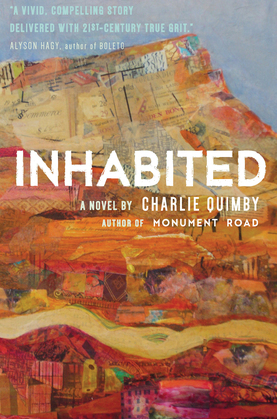 "The lives of Quimby's finely drawn characters interweave to produce a panorama as wide and full of light as the near–desert setting."


Meg Mogrin sells pricey houses, belongs to the mayor's inner circle, and knows more than she's letting on about her sister's death.
Isaac Samson lives in a tent and believes Thomas Edison invented the Reagan presidency. When their town attracts a game–changing development, Isaac is displaced by the town's crackdown on vagrancy. As Isaac struggles to regain stability, Meg contends with conflicting roles of assisting the developer while serving on the homeless coalition. Isaac's quest to return a lost artifact soon intrudes into Meg's tidy world, digging up a part of her past she'd rather remained buried. Inhabited, a sister novel to Charlie Quimby's acclaimed Monument Road, returns to the Grand Valley of western Colorado to explore the dimensions of loss, the boundaries of compassion, and the endurance of love.


CHARLIE QUIMBY is the author of Monument Road, an Indie Next List pick and Booklist Editors' Choice. He began his writing career as playwright and arts journalist, veered into corporate communications and then founded a marketing agency that now purrs along without him. Along the way, he collected awards and developed the notion he had a few good novels in him. A native Coloradan and adopted Minnesotan, he is at home in both places.