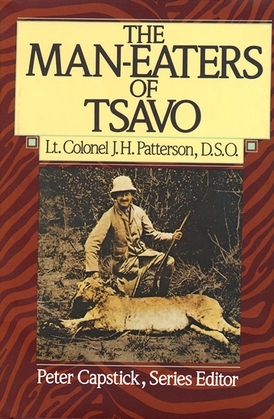 The Man-Eaters of Tsavo

St. Martin's is proud to present a new series of the greatest classics in the literature of hunting and adventure, chosen from the personal library of writer and big game hunter Peter Hathaway Capstick. These showcase volumes will once again make available the true masterpieces of Africana to collectors, armchair hunters, sportsmen, and readers at large.

Considered one of the greatest man-eating sagas of all time, The Man-Eaters of Tsavo is the firsthand account of the infamous Tsavo lions. These lions--who for nearly a year terrorized East Africa--succeeded in bringing the construction of a railway line to a complete halt, and have been credited with the deaths of some one hundred people. Written by the legendary officer who shot these lions and risked death several times in the attempt, The Man-Eaters of Tsavo is not only the story of this breathtaking hunt, but of Lieutenant-Colonel Patterson's other adventures in the African bush.

"I think that the incident of the Uganda man-eating lions...is the most remarkable account of which we have any record."--Theodore Roosevelt