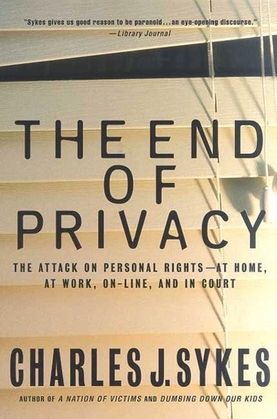 As Justice Louis Brandeis suggested more than a century ago, privacy--the right to be left alone--is the most valued, if not the most celebrated, right enjoyed by Americans. But in the face of computer, video, and audio technology, aggressive and sophisticated marketing databases, state and federal "wars" against crime and terrorism, new laws governing personal behavior, and an increasingly intrusive media, all of us find our personal space and freedom under attack.

In The End of Privacy, Charles Sykes traces the roots of privacy in our nation's founding and Constitution, and reveals its inexorable erosion in our time. From our homes and offices to the presidency, Sykes defines what we have lost, citing example after example of citizens who have had their conversations monitored, movements surveilled, medical and financial records accessed, sexual preferences revealed, homes invaded, possessions confiscated, and even lives threatened--all in the name of some alleged higher social or governmental good. Sykes concludes by suggesting steps by which we might begin to recover the territory we've lost: our fundamental right to our own lives.