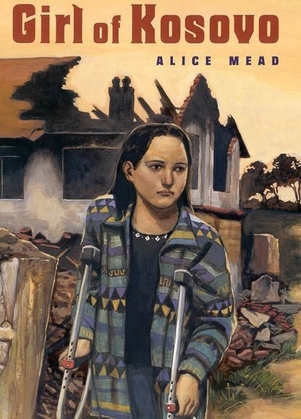 A child's perspective on war.

In 1998 the Serb military intensifies its efforts to expel Albanians from Kosovo. Ethnic cleansing forces many families to seek safety in the surrounding hills and mountains. The Kosovo Liberation Army fights back guerrilla style, struggling for an independent Kosovo. Some Albanian villagers support the freedom fighters. Others fear that armed resistance, which they have successfully avoided through long years of Serb repression, will only increase the death toll. And always there is terrible tension between Serbian and Albanian neighbors who once were friends. Eleven-year-old Zana Dugolli, an Albanian Kosovar, isn't sure what to think. She does know not to speak her language to Serbs. And every day she worries about her mother and father, her brothers, the farm, the apple orchard. Already she has lost her best friend, a Serb. Then Zana's village is shelled, and her worst nightmare is realized. Her father and two brothers are killed in the attack, and her leg is shattered by shrapnel. Alone in a Serb hospital, she remembers her father's words: "Don't let them fill your heart with hate."

Based on a true story, Alice Mead's stark, affecting novel about a place and conflict she knows well will help young readers understand the war in Kosovo.