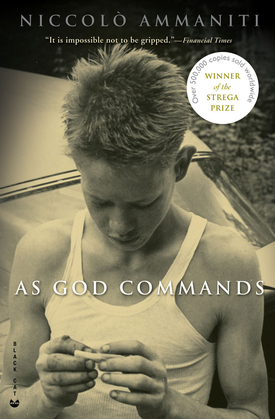 The bestselling author of I’m Not Scared delivers “a black thriller with the momentum of an action-packed Hollywood movie” (The Times Literary Supplement).

The winner of the prestigious Strega Prize, As God Commands is a dizzying and compulsively readable novel set in a moribund town in industrial Italy, where a father and son contend with a hostile world and their own inner demons. The economically depressed village of Varrano, where Cristiano Zena lives with his hard-drinking, out-of-work father, Rino, is a world away from the picturesque towns of travel-brochure Italy. When Rino and his rough-edged cronies Danilo and Quattro Formaggi come up with a plan to reverse all their fortunes, Cristiano wonders if maybe their lives are poised for deliverance after all. But the plan goes horribly awry. On a night of apocalyptic weather, each character will act in a way that will have irreversible consequences for themselves and others, and Cristiano will find his life changed forever, and not in the way he had hoped. Gritty and relentless, As God Commands moves at breakneck speed, blending brutal violence, dark humor, and surprising tenderness. With clear-eyed affection, Niccolò Ammaniti introduces a cast of unforgettable characters trapped at the crossroads of hope and despair.

“It is impossible not to be gripped.” —Financial Times

“Punk-rock desperadoes and a daft father-son tragicomedy team run riot through the mess and splendor of today’s Italy . . . Propulsive from the first page . . . Not at all pretty, but darkly, ferociously beautiful—a triumph for Europe’s hottest novelist.” —Kirkus Reviews (starred review)