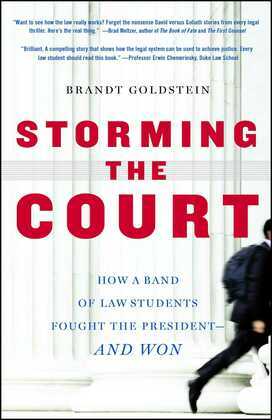 A tale more riveting than fiction, Storming the Court is the true story of idealistic law students who challenged the United States government in a battle for freedom and human rights that went all the way to the Supreme Court -- and resonates today more than ever.
In 1992, three hundred innocent men, women, and children who had qualified for political asylum in the United States were forced into a detention camp at the American naval base at Guantánamo Bay, Cuba, and told they might never be freed. Storming the Court takes readers inside this modern-day atrocity to tell the tale of Yvonne Pascal -- a young, charismatic activist -- and other Haitian refugees who had fled their violent homeland only to end up prisoners at Guantánamo. They had no lawyers, no contact with the outside world, and no hope...except for a band of students at Yale Law School fifteen hundred miles away.
Led by Harold Koh, a gifted but untested law professor, these remarkable twentysomethings waged a legal war against two U.S. presidents to defend the Constitution and the principles symbolized by the Statue of Liberty. It was an education in law unlike any other. With the refugees' lives at stake, the students threw aside classes and career plans to fight an army of government attorneys in a case so politically volatile that the White House itself intervened in the legal strategy.
Featuring a real-life cast that includes Kenneth Starr and other top Justice Department officials, U.S. marines, radical human-rights lawyers, and Presidents George H. W. Bush and Bill Clinton, Storming the Court follows the students from the classrooms at Yale to the prison camp at Guantánamo to the federal courts in New York and Washington as they struggle to save Yvonne Pascal and her fellow Haitian refugees.
At a time when the treatment of post-9/11 Guantánamo detainees has been challenged in the public arena and the courts, this book traces the origins of the legal battle over America's use of the naval base as a prison and illuminates the troubling ways that politics can influence legal decisions. Above all, though, Storming the Court is the David-and-Goliath story of a group of passionate law students who took on their government in the name of the greatest of American values: freedom.