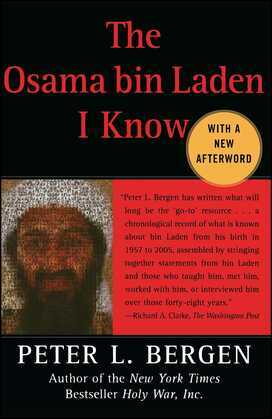 The Osama bin Laden I Know

The Osama bin Laden I Know is an unprecedented oral history of Osama bin Laden's rise to revered leader of al Qaeda.
Peter Bergen takes the reader onto the battlefields of Afghanistan as bin Laden goes from a shy, quiet teen to a leader; he brings you into Osama's intimate family life as he lives under the radar in Sudan, then Afghanistan; he puts you right in the room for al Qaeda's very first meeting; and he uses eyewitness accounts to relate what bin Laden said, and thought on 9/11 as he watched the twin towers fall.
Derived from Bergen's interviews with more than 50 people who know bin Laden personally, from his highschool teacher to an early al Qaeda member who later became a US informant, The Osama bin Laden I Know recounts individual experiences with the man who has declared the US, and its allies, his greatest enemies.