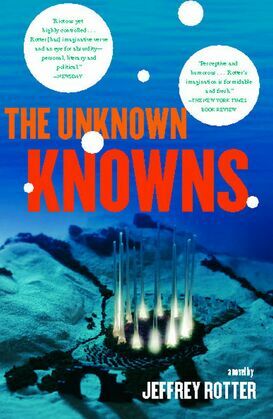 A Novel
by Jeffrey Rotter (Author)
Excerpt
Fiction Fantasy Literary
warning_amber
One or more licenses for this book have been acquired by your organisation details
EPUB
Unlimited loans, 2 years, One at a time
Details

Jim Rath's wife has grown tired of his hobbies: his immaculately maintained comics collection, his creepy underwater experiments, and his dreams of building a museum based on the Aquatic Ape Theory of Human Evolution. On the night that she leaves him, Jim thinks he has spotted an emissary from a lost aquatic race called the Nautikons. In truth, the man is a low-level agent of the Department of Homeland Security. What follows is a riveting story of two quixotic men who stalk each other toward a bloody showdown -- a spectacularly moronic act of terrorism at an aging water park.

The Unknown Knowns -- its title is a reference to a quote from former defense secretary Donald Rumsfeld -- is a brilliant send-up of the insidious language and sometimes tragically comic focus of our country's Homeland Security Department. Combining the social satire of Kurt Vonnegut with the paranoid delusions of Thomas Pynchon, Rotter takes everyday domestic fixations and turns them into a hilarious assessment of the human condition. Fresh, imaginative, and deft, The Unknown Knowns marks the arrival of a unique new voice in literary fiction.