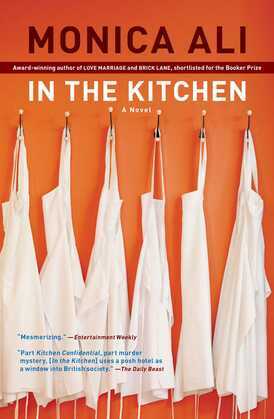 A Novel
by Monica Ali (Author)
Excerpt
Fiction Literary
warning_amber
One or more licenses for this book have been acquired by your organisation details
EPUB
Unlimited loans, 2 years, One at a time
Details

Monica Ali, nominated for the Man Booker Prize, the Los Angeles Times Book Prize, and the National Book Critics Circle Award, has written a follow-up to Brick Lane that will further establish her as one of England's most compelling and original voices.

Gabriel L ightfoot is an enterprising man from a northern E ngland mill town, making good in London. As executive chef at the once-splendid Imperial H otel, he is trying to run a tight kitchen. But his integrity, to say nothing of his sanity, is under constant challenge from the competing demands of an exuberant multinational staff, a gimlet-eyed hotel management, and business partners with whom he is secretly planning a move to a restaurant of his own. D espite the pressures, all his hard work looks set to pay off.

Until a worker is found dead in the kitchen's basement. It is a small death, a lonely death -- but it is enough to disturb the tenuous balance of Gabe's life.

Elsewhere, Gabriel faces other complications. His father is dying of cancer, his girlfriend wants more from their relationship, and the restaurant manager appears to be running an illegal business under Gabe's nose.

Enter L ena, an eerily attractive young woman with mysterious ties to the dead man. U nder her spell, Gabe makes a decision, the consequences of which strip him naked and change the course of the life he knows -- and the future he thought he wanted.

Readers and reviewers have been stunned by the breadth of humanity in Monica Ali's fiction. S he is compared to D ickens and called one of three British novelists who are "the voice of a generation" by Time magazine. In the Kitchen is utterly contemporary yet has all the drama and heartbreak of a great nineteenth-century novel. Ali is sheer pleasure to read, a truly magnificent writer.