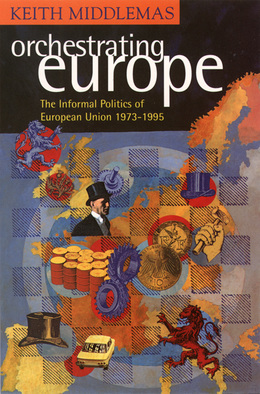 Originally published in 1995 and now available as an ebook.

This edition does not include illustrations.

European Union is the grand political enigma of the late twentieth century. Its very essence resists definition, and why and how it works defy agreed explanation. For politicians, it is endlessly controversial, even occasionally fatal, but for businessmen and bankers it is a source of opportunity, and for students the gateway to broader horizons. From above, where Council ministers haggle, it seems to offer a welcome hybrid of all member-states’ systems; but from below, at best it represents the legal, political and economic context in which every player is bound to operate, while at worst it is perceived as a miasma or a haven for unproductive bureaucrats.

But a clear view is nonetheless possible. In examining the informal machinery of European power, Keith Middlemas opens up an unfamiliar and expansive alternative prospect, illuminating not what is 'said' to happen, but what actually does. In the gap between the official and the real, member-states, regions, companies, financial institutions all complete, seeking to create durable networks of influence to gain advantage in a never-ending game, a game fundamental to the EU’s nature. A complex web of rivalries is spun. Drawing on over four hundred interviews by a gifted team of European researchers with participants at all levels, Middlemas turns his unblinking eye on those who inhabit that web to disentangle its disputes, its rules, its flaws, its successes. He shows us a Europe spinning itself into existence, and a Union much different from that envisaged by its founders.