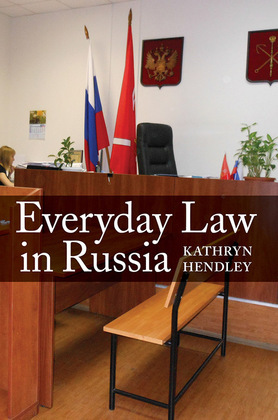 Everyday Law in Russia challenges the prevailing common wisdom that Russians cannot rely on their law and that Russian courts are hopelessly politicized and corrupt. While acknowledging the persistence of verdicts dictated by the Kremlin in politically charged cases, Kathryn Hendley explores how ordinary Russian citizens experience law. Relying on her own extensive observational research in Russia’s new justice-of-the-peace courts as well as her analysis of a series of focus groups, she documents Russians’ complicated attitudes regarding law. The same Russian citizen who might shy away from taking a dispute with a state agency or powerful individual to court might be willing to sue her insurance company if it refuses to compensate her for damages following an auto accident. Hendley finds that Russian judges pay close attention to the law in mundane disputes, which account for the vast majority of the cases brought to the Russian courts.

Any reluctance on the part of ordinary Russian citizens to use the courts is driven primarily by their fear of the time and cost—measured in both financial and emotional terms—of the judicial process. Like their American counterparts, Russians grow more willing to pursue disputes as the social distance between them and their opponents increases; Russians are loath to sue friends and neighbors, but are less reluctant when it comes to strangers or acquaintances. Hendley concludes that the "rule of law" rubric is ill suited to Russia and other authoritarian polities where law matters most—but not all—of the time.