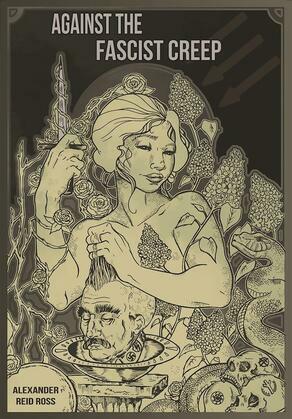 Against the Fascist Creep

US society is notoriously complacent when it comes to the rise of fascist tendencies. When Dylann Roof murdered nine black parishioners in a Charleston church, media emphasis remained superficial. Familiar narratives of insane lone wolves and Confederate flags masked the organizations that inspired Roof's act and their connections to politicians at the local, state, and federal levels throughout the South—groups like the Council of Conservative Citizens (formerly the White Citizens Council).

Scratch the surface of such groups and you'll find a web of complex ties and front groups created by fascist ideologues. Trace the connections further and further back and you find yourself moving from semi-respectable organizations through darker and darker levels of fascism and hatred.

Fascism is not a euphemism here. A terrifying tour of the history and influence of international neo-fascists, Against the Fascist Creep maps the connections and names the names, showing how infiltration is a conscious and secret program for white nationalist and neo-Nazi groups. Their activity has exploded since the economic crisis and they have stepped up efforts to influence both mainstream and radical groups, including anarchists.

This book is a line in the sand that both identifies the creep of fascist messages, ideas, and organization throughout our society and outlines how to stop it in its tracks.

Alexander Reid Ross is a contributing moderator of the Earth First! Newswire. He is the editor of Grabbing Back: Essays Against the Global Land Grab and a contributor to Life During Wartime: Resisting Counterinsurgency.