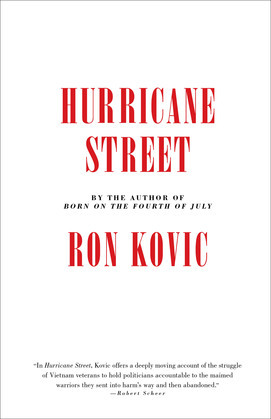 by Ron Kovic (Author)
Excerpt
Nonfiction Biography & autobiography Military Historical
EPUB
Unlimited loans, One at a time
Details
The author of Born on the Fourth of July delivers “a harrowing, poignant telling of the American Veteran’s Movement and its members’ struggles” (Manhattan Book Review).

In the spring of 1974, as the last American troops were being pulled out of Vietnam, Ron Kovic and a small group of other severely injured veterans in a California VA hospital launched the American Veterans Movement. In a phenomenal feat of political organizing, Kovic corralled his fellow AVM members into staging a sit-in, and then a hunger strike, in the Los Angeles office of Senator Alan Cranston, demanding better treatment of injured and disabled veterans.

This was a short-lived and chaotic but ultimately successful movement to improve the deplorable conditions in VA hospitals across the country. Hurricane Street is their story—one that resonates deeply today—told by Kovic in the passionate and brutally honest style that led to over one million sales of Born on the Fourth of July.

“Another raw exposé on the cost of war . . . The book is an unflinching anti-war declaration, written in blood and the sweat of too many haunted nights by a Vietnam Marine Corps sergeant who later opposed the wars in Iraq and Afghanistan.” —Los Angeles Times

“A deeply moving account of the struggle of Vietnam veterans to hold politicians accountable to the maimed warriors they sent into harm’s way and then abandoned.” —Robert Scheer, author of They Know Everything About You