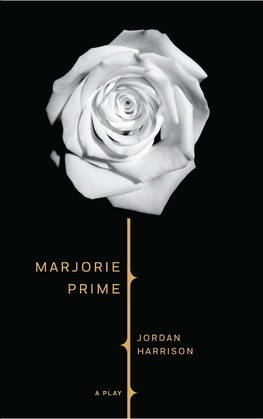 Finalist for the 2015 Pulitzer Prize for Drama

“An elegant, thoughtful and quietly unsettling drama. Marjorie Primeoperates by stealth… at some point, you realize that it’s been landing skillfully targeted punch after punch, right where it hurts… It keeps developing in your head, like a photographic negative, long after you have seen it.”

“Memory is an essential element of life—crucial to thought, feeling, progress, identity. But it also comes into play with particular power and meaning after someone who has been loved dies. And it is this tension between life and death—with memory functioning as connective tissue—that animates Jordan Harrison’s subtly shattering, Marjorie Prime.” —Hedy Weiss, Chicago Sun-Times

“Jordan Harrison’s play has all the hallmarks of the best science fiction; it’s clever in conceit, alive with humor, surprising in its turns, and terribly haunting by the time the lights go out.”

With help from an intriguingly innovative technology in a future not far from our present, Marjorie examines her past, sometimes replacing her realities with idealized memories. Through deeply drawn characters—both real and in the form of artificial intelligence companions, or “Primes” —Harrison burrows into troubling questions of the digital age: What would we remember, and what would we forget, given the power of authorship? Will we be any less human, once computers know us better than we know ourselves?

Jordan Harrison grew up on Bainbridge Island, near Seattle. His plays include Maple and Vine, The Grown-Up, Doris to Darlene, Amazons and Their Men, Finn in the Underworld, Act a Lady, Kid-Simple, and Futura. Harrison is the recipient of a Guggenheim Fellowship, a Hodder Fellowship, the Kesselring Prize, and the Horton Foote Prize, among other awards. He was a 2015 Pulitzer Prize finalist for Marjorie Prime. A graduate of the Brown MFA program, Harrison is a writer-producer for the Netflix original series Orange is the New Black.