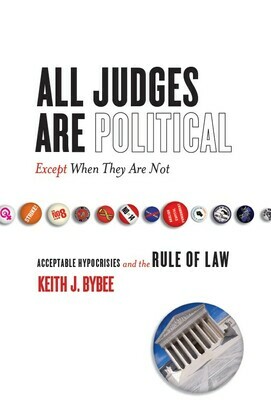 All Judges Are Political—Except When They Are Not

We live in an age where one person's judicial "activist" legislating from the bench is another's impartial arbiter fairly interpreting the law. After the Supreme Court ended the 2000 Presidential election with its decision in Bush v. Gore, many critics claimed that the justices had simply voted their political preferences. But Justice Clarence Thomas, among many others, disagreed and insisted that the Court had acted according to legal principle, stating: "I plead with you, that, whatever you do, don't try to apply the rules of the political world to this institution; they do not apply." The legitimacy of our courts rests on their capacity to give broadly acceptable answers to controversial questions. Yet Americans are divided in their beliefs about whether our courts operate on unbiased legal principle or political interest. Comparing law to the practice of common courtesy, Keith Bybee explains how our courts not only survive under these suspicions of hypocrisy, but actually depend on them. Law, like courtesy, furnishes a means of getting along. It frames disputes in collectively acceptable ways, and it is a habitual practice, drummed into the minds of citizens by popular culture and formal institutions. The rule of law, thus, is neither particularly fair nor free of paradoxical tensions, but it endures. Although pervasive public skepticism raises fears of judicial crisis and institutional collapse, such skepticism is also an expression of how our legal system ordinarily functions.