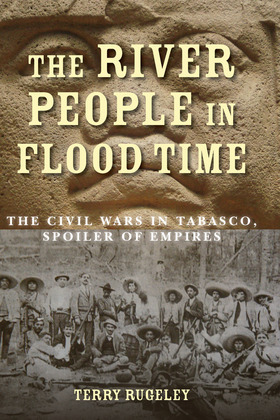 The River People in Flood Time

The River People in Flood Time tells the astonishing story of how the people of nineteenth-century Tabasco, Mexico, overcame impossible odds to expel foreign interventions. Tabascans resisted control by Mexico City, overcame the grip of a Cuban adventurer who seized the region for two years, turned back the United States Navy, and defeated the French Intervention of the early 1860s, thus remaining free territory while the rest of the nation struggled for four painful years under the imposed monarchy of Maximilian.
With colorful anecdotes and biographical sketches, this deeply researched and masterfully written history reconstructs the lives and culture of the Tabascans, as well as their pre-Columbian and colonial past. Rugeley reveals how over the centuries, one colorful character after another sets foot on the Tabascan stage, only to be undone by climate, disease, and more than anything else, tenacious Tabascan resistance. Virtually the only English-language study of this little-known province, River People in Flood Time explores the ways in which geography, climate, and social relationships contributed to an extraordinarily successful defense against unwelcome meddling from the outside world.
River People in Flood Time demonstrates the complex relationship between imperial forces in relation to remote parts of Latin America, and the way that resistance to external pressure helped mold the thoughts, attitudes, and actions of those remote peoples. Nineteenth-century Mexico was more a land of localities than a unified nation, and Rugeley's narrative paints an indelible portrait of one of its least known and most unique provinces.