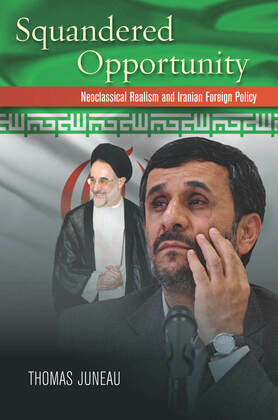 The Islamic Republic of Iran faced a favorable strategic environment following the US invasions of Afghanistan in 2001 and Iraq in 2003. Its leadership attempted to exploit this window of opportunity by assertively seeking to expand Iran's interests throughout the Middle East. It fell far short, however, of fulfilling its long-standing ambition of becoming the dominant power in the Persian Gulf and a leading regional power in the broader Middle East.

In Squandered Opportunity, Thomas Juneau develops a variant of neoclassical realism, a theory of foreign policy mistakes, to explore the causes and consequences of Iran's sub-optimal performance. He argues that while rising power drove Iranian assertiveness—as most variants of realism would predict—the peculiar nature of Iran's power and the intervention of specific domestic factors caused Iran's foreign policy to deviate, sometimes significantly, from what would be considered the potential optimal outcomes.

Juneau explains that this sub-optimal foreign policy led to important and negative consequences for the country. Despite some gains, Iran failed to maximize its power, its security and its influence in three crucial areas: the Arab-Israeli conflict; Iraq; and the nuclear program. Juneau also predicts that, as the window of opportunity steadily closes for Iran, its power, security, and influence will likely continue to decline in coming years.