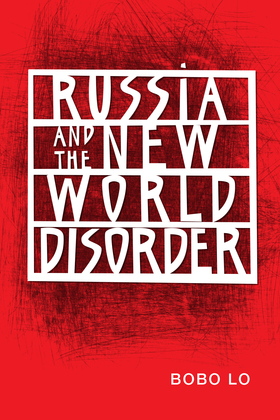 Russia and the New World Disorder

The Russian annexation of Crimea was one of the great strategic shocks of the past twenty-five years. For many in the West, Moscow's actions in early 2014 marked the end of illusions about cooperation, and the return to geopolitical and ideological confrontation. Russia, for so long a peripheral presence, had become the central actor in a new global drama. In this groundbreaking book, renowned scholar Bobo Lo analyzes the broader context of the crisis by examining the interplay between Russian foreign policy and an increasingly anarchic international environment. He argues that Moscow's approach to regional and global affairs reflects the tension between two very different worlds—the perceptual and the actual.

The Kremlin highlights the decline of the West, a resurgent Russia, and the emergence of a new multipolar order. But this idealized view is contradicted by a world disorder that challenges core assumptions about the dominance of great powers and the utility of military might. Its lesson is that only those states that embrace change will prosper in the twenty-first century.

A Russia able to redefine itself as a modern power would exert a critical influence in many areas of international politics. But a Russia that rests on an outdated sense of entitlement may end up instead as one of the principal casualties of global transformation.