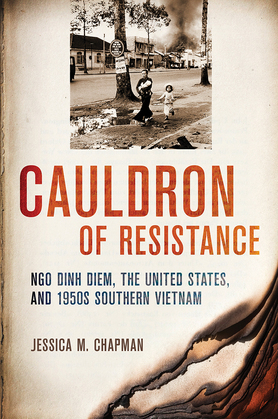 In 1955, Ngo Dinh Diem organized an election to depose chief-of-state Bao Dai, after which he proclaimed himself the first president of the newly created Republic of Vietnam. The United States sanctioned the results of this election, which was widely condemned as fraudulent, and provided substantial economic aid and advice to the RVN. Because of this, Diem is often viewed as a mere puppet of the United States, in service of its Cold War geopolitical strategy. That narrative, Jessica M. Chapman contends in Cauldron of Resistance, grossly oversimplifies the complexity of South Vietnam's domestic politics and, indeed, Diem's own political savvy.

Based on extensive work in Vietnamese, French, and American archives, Chapman offers a detailed account of three crucial years, 1953–1956, during which a new Vietnamese political order was established in the south. It is, in large part, a history of Diem's political ascent as he managed to subdue the former Emperor Bao Dai, the armed Hoa Hao and Cao Dai religious organizations, and the Binh Xuyen crime organization. It is also an unparalleled account of these same outcast political powers, forces that would reemerge as destabilizing political and military actors in the late 1950s and early 1960s.

Chapman shows Diem to be an engaged leader whose personalist ideology influenced his vision for the new South Vietnamese state, but also shaped the policies that would spell his demise. Washington's support for Diem because of his staunch anticommunism encouraged him to employ oppressive measures to suppress dissent, thereby contributing to the alienation of his constituency, and helped inspire the organized opposition to his government that would emerge by the late 1950s and eventually lead to the Vietnam War.