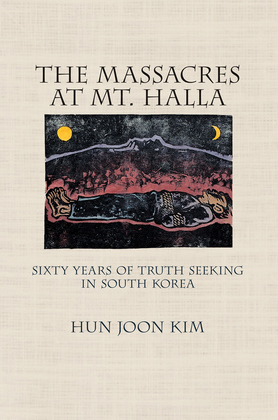 The Massacres at Mt. Halla

In The Massacres at Mt. Halla, Hun Joon Kim presents a compelling story of state violence, human rights advocacy, and transitional justice in South Korea since 1947. The "Jeju 4.3 events" were a series of armed uprisings and counterinsurgency actions that occurred between 1947 and 1954 in the rugged landscape around Mt. Halla in Jeju Province, South Korea. The counterinsurgency strategy was extremely brutal, involving mass arrests and detentions, forced relocations, torture, indiscriminate killings, and many large-scale massacres of civilians. The conflict resulted in an estimated thirty thousand deaths—about 10 percent of the total population of Jeju Province in 1947. News of this enormous loss of life was carefully suppressed until the success of the 1987 June Democracy Movement.

After concisely detailing the events of Jeju 4.3, Kim traces the grassroots advocacy campaign that ultimately resulted in the creation of a truth commission with a threefold mandate: to investigate what happened in Jeju, to identify the victims, and to restore the honor of those victims. Although an official report was issued in 2003, resulting in an official apology from President Roh Moo Hyun (the first presidential apology for the abuse of state power in South Korea’s history), the commission’s work continues to this day. It has long been believed that truth commissions are most likely to be established immediately after a democratic transition, as a result of a power game involving old and new elites. Kim tells a different story: he emphasizes the importance of sixty years of local activist work and the long history of truth’s suppression.