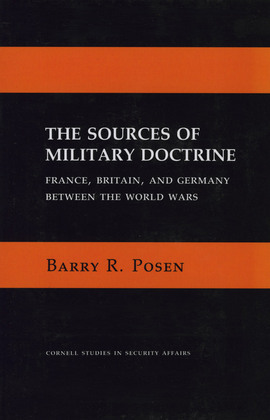 The Sources of Military Doctrine

Barry R. Posen explores how military doctrine takes shape and the role it plays in grand strategy-that collection of military, economic, and political means and ends with which a state attempts to achieve security. Posen isolates three crucial elements of a given strategic doctrine: its offensive, defensive, or deterrent characteristics, its integration of military resources with political aims, and the degree of military or operational innovation it contains. He then examines these components of doctrine from the perspectives of organization theory and balance of power theory, taking into account the influence of technology and geography.

Looking at interwar France, Britain, and Germany, Posen challenges each theory to explain the German Blitzkrieg, the British air defense system, and the French Army's defensive doctrine often associated with the Maginot Line. This rigorous comparative study, in which the balance of power theory emerges as the more useful, not only allows us to discover important implications for the study of national strategy today, but also serves to sharpen our understanding of the origins of World War II.