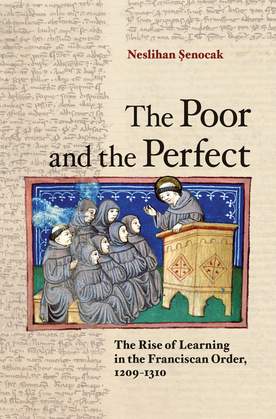 The Poor and the Perfect

One of the enduring ironies of medieval history is the fact that a group of Italian lay penitents, begging in sackcloths, led by a man who called himself simple and ignorant, turned in a short time into a very popular and respectable order, featuring cardinals and university professors among its ranks. Within a century of its foundation, the Order of Friars Minor could claim hundreds of permanent houses, schools, and libraries across Europe; indeed, alongside the Dominicans, they attracted the best minds and produced many outstanding scholars who were at the forefront of Western philosophical and religious thought.

In The Poor and the Perfect, Neslihan Şenocak provides a grand narrative of this fascinating story in which the quintessential Franciscan virtue of simplicity gradually lost its place to learning, while studying came to be considered an integral part of evangelical perfection. Not surprisingly, turmoil accompanied this rise of learning in Francis’s order. Şenocak shows how a constant emphasis on humility was unable to prevent the creation within the Order of a culture that increasingly saw education as a means to acquire prestige and domination. The damage to the diversity and equality among the early Franciscan community proved to be irreparable. But the consequences of this transformation went far beyond the Order: it contributed to a paradigm shift in the relationship between the clergy and the schools and eventually led to the association of learning with sanctity in the medieval world. As Şenocak demonstrates, this episode of Franciscan history is a microhistory of the rise of learning in the West.