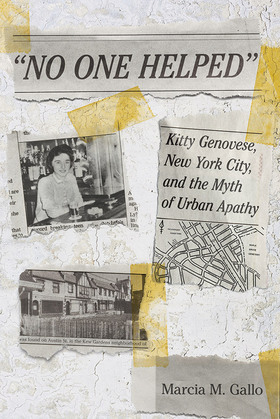 In "No One Helped" Marcia M. Gallo examines one of America’s most infamous true-crime stories: the 1964 rape and murder of Catherine "Kitty" Genovese in a middle-class neighborhood of Queens, New York. Front-page reports in the New York Times incorrectly identified thirty-eight indifferent witnesses to the crime, fueling fears of apathy and urban decay. Genovese’s life, including her lesbian relationship, also was obscured in media accounts of the crime. Fifty years later, the story of Kitty Genovese continues to circulate in popular culture. Although it is now widely known that there were far fewer actual witnesses to the crime than was reported in 1964, the moral of the story continues to be urban apathy. "No One Helped" traces the Genovese story’s development and resilience while challenging the myth it created.

"No One Helped" places the conscious creation and promotion of the Genovese story within a changing urban environment. Gallo reviews New York’s shifting racial and economic demographics and explores post–World War II examinations of conscience regarding the horrors of Nazism. These were important factors in the uncritical acceptance of the story by most media, political leaders, and the public despite repeated protests from Genovese’s Kew Gardens neighbors at their inaccurate portrayal. The crime led to advances in criminal justice and psychology, such as the development of the 911 emergency system and numerous studies of bystander behaviors. Gallo emphasizes that the response to the crime also led to increased community organizing as well as feminist campaigns against sexual violence. Even though the particulars of the sad story of her death were distorted, Kitty Genovese left an enduring legacy of positive changes to the urban environment.