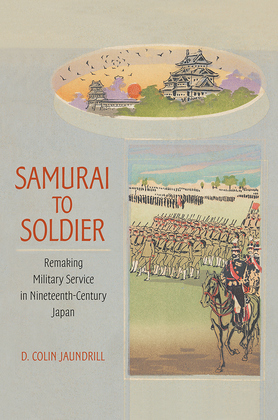 In Samurai to Soldier, D. Colin Jaundrill rewrites the military history of nineteenth-century Japan. In fifty years spanning the collapse of the Tokugawa shogunate and the rise of the Meiji nation-state, conscripts supplanted warriors as Japan’s principal arms-bearers. The most common version of this story suggests that the Meiji institution of compulsory military service was the foundation of Japan’s efforts to save itself from the imperial ambitions of the West and set the country on the path to great power status. Jaundrill argues, to the contrary, that the conscript army of the Meiji period was the culmination—and not the beginning—of a long process of experimentation with military organization and technology.

Jaundrill traces the radical changes to Japanese military institutions, as well as the on-field consequences of military reforms in his accounts of the Boshin War (1868–1869) and the Satsuma Rebellions of 1877. He shows how pre-1868 developments laid the foundations for the army that would secure Japan’s Asian empire.