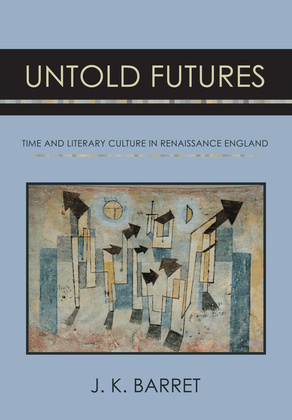 In Untold Futures, J. K. Barret locates models for recovering the variety of futures imagined within some of our most foundational literature. These poems, plays, and prose fictions reveal how Renaissance writers embraced uncertain potential to think about their own present moment and their own place in time. The history of the future that Barret reconstructs looks beyond futures implicitly dismissed as impossible or aftertimes defined by inevitability and fixed perspective. Chapters on Philip Sidney’s Old Arcadia, Edmund Spenser’s The Faerie Queene, William Shakespeare’s Titus Andronicus, Antony and Cleopatra, and Cymbeline, and John Milton’s Paradise Lost trace instead a persistent interest in an indeterminate, earthly future evident in literary constructions that foreground anticipation and expectation.

Barret argues that the temporal perspectives embedded in these literary texts unsettle some of our most familiar points of reference for the period by highlighting an emerging cultural self-consciousness capable of registering earthly futures predicated on the continued sameness of time rather than radical ruptures in it. Rather than mapping a particular future, these writers generate imaginative access to a range of futures. Barret makes a strong case for the role of language itself in emerging conceptualizations of temporality.