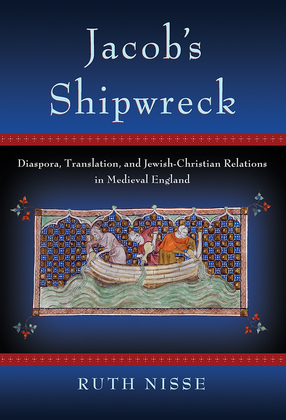 Jewish and Christian authors of the High Middle Ages not infrequently came into dialogue or conflict with each other over traditions drawn from ancient writings outside of the bible. Circulating in Latin and Hebrew adaptations and translations, these included the two independent versions of the Testament of Naphtali in which the patriarch has a vision of the Diaspora, a shipwreck that scatters the twelve tribes. The Christian narrative is linear and ends in salvation; the Jewish narrative is circular and pessimistic. For Ruth Nisse, this is an emblematic text that illuminates relationships between interpretation, translation, and survival.

In Nisse’s account, extrabiblical literature encompasses not only the historical works of Flavius Josephus but also, in some of the more ingenious medieval Hebrew imaginative texts, Aesop’s fables and the Aeneid. While Christian-Jewish relations in medieval England and Northern France are most often associated with Christian polemics against Judaism and persecutions of Jews in the wake of the Crusades, the period also saw a growing interest in language study and translation in both communities. These noncanonical texts and their afterlives provided Jews and Christians alike with resources of fiction that they used to reconsider boundaries of doctrine and interpretation. Among the works that Nisse takes as exemplary of this intersection are the Book of Yosippon, a tenth-century Hebrew adaptation of Josephus with a wide circulation and influence in the later middle ages, and the second-century romance of Aseneth about the religious conversion of Joseph’s Egyptian wife. Yosippon gave Jews a new discourse of martyrdom in its narrative of the fall of Jerusalem, and at the same time it offered access to the classical historical models being used by their Christian contemporaries. Aseneth provided its new audience of medieval monks with a way to reimagine the troubling consequences of unwilling Jewish converts.