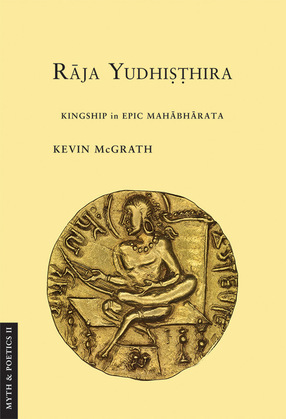 In Raja Yudhisthira, Kevin McGrath brings his comprehensive literary, ethnographic, and analytical knowledge of the epic Mahabharata to bear on the representation of kingship in the poem. He shows how the preliterate Great Bharata song depicts both archaic and classical models of kingly and premonetary polity and how the king becomes a ruler who is viewed as ritually divine. Based on his precise and empirical close reading of the text, McGrath then addresses the idea of heroic religion in both antiquity and today; for bronze-age heroes still receive great devotional worship in modern India and communities continue to clash at the sites that have been—for millennia—associated with these epic figures; in fact, the word hero is in fact more of a religious than a martial term.One of the most important contributions of Raja Yudhisthira, and a subtext in McGrath's analysis of Yudhisthira’s kingship, is the revelation that neither of the contesting moieties of the royal Hastinapura clan triumphs in the end, for it is the Yadava band of Krsna who achieve real victory. That is, it is the matriline and not the patriline that secures ultimate success: it is the kinship group of Krsna—the heroic figure who was to become the dominant Vaisnava icon of classical India—who benefits most from the terrible Bharata war.