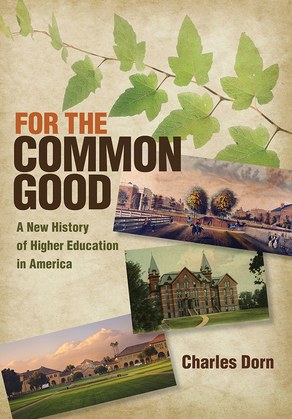 For the Common Good

Are colleges and universities in a period of unprecedented disruption? Is a bachelor's degree still worth the investment? Are the humanities coming to an end? What, exactly, is higher education good for?

In For the Common Good, Charles Dorn challenges the rhetoric of America’s so-called crisis in higher education by investigating two centuries of college and university history. From the community college to the elite research university—in states from California to Maine—Dorn engages a fundamental question confronted by higher education institutions ever since the nation’s founding: Do colleges and universities contribute to the common good?

Tracking changes in the prevailing social ethos between the late eighteenth and early twenty-first centuries, Dorn illustrates the ways in which civic-mindedness, practicality, commercialism, and affluence influenced higher education’s dedication to the public good. Each ethos, long a part of American history and tradition, came to predominate over the others during one of the four chronological periods examined in the book, informing the character of institutional debates and telling the definitive story of its time. For the Common Good demonstrates how two hundred years of political, economic, and social change prompted transformation among colleges and universities—including the establishment of entirely new kinds of institutions—and refashioned higher education in the United States over time in essential and often vibrant ways.