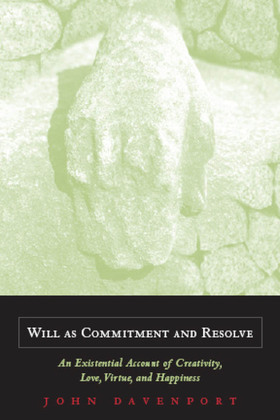 Will as Commitment and Resolve

In contemporary philosophy, the will is often regarded as a sheer philosophical fiction. In Will as Commitment and Resolve, Davenport argues not only that the will is the central power of human agency that makes decisions and forms intentions but also that it includes the capacity to generate new motivation different in structure from prepurposive desires.

The concept of "projective motivation" is the central innovation in Davenport's existential account of the everyday notion of striving will. Beginning with the contrast between "eastern" and "western" attitudes toward assertive willing, Davenport traces the lineage of the idea of projective motivation from NeoPlatonic and Christian conceptions of divine motivation to Scotus, Kant, Marx, Arendt, and Levinas.

Rich with historical detail, this book includes an extended examination of Platonic and Aristotelian eudaimonist theories of human motivation. Drawing on contemporary critiques of egoism, Davenport argues that happiness is primarily a byproduct of activities and pursuits aimed at other agent-transcending goods for their own sake. In particular, the motives in virtues and in the practices as defined by Alasdair MacIntyre are projective rather than eudaimonist.

This theory is supported by analyses of radical evil, accounts of intrinsic motivation in existential psychology, and contemporary theories of identity-forming commitment in analytic moral psychology. Following Viktor Frankl, Joseph Raz, and others, Davenport argues that Harry Frankfurt's conception of caring requires objective values worth caring about, which serve as rational grounds for projecting new final ends. The argument concludes with a taxonomy of values or goods, devotion to which can make life meaningful for us.