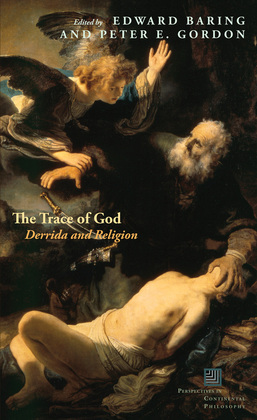 The Trace of God

by Edward Baring (Editor), Peter E. Gordon (Editor)
Excerpt
Nonfiction Human science Philosophy Movements Deconstruction Religion
EPUB
Unlimited loans, One at a time
Details
“Derrida’s most lasting legacy might well be his writings on religion . . . If the perplexed seek a guide, they can do no better than this excellent volume.” —Warren Breckman, University of Pennsylvania

Jacques Derrida’s writings on the question of religion have played a crucial role in the transformation of scholarly debate across the globe. The Trace of God provides a compact introduction to this debate.

It considers Derrida’s fraught relationship to Judaism and his Jewish identity, broaches the question of Derrida’s relation to the Western Christian tradition, and examines both the points of contact and the silences in Derrida’s treatment of Islam.

“An astonishingly fresh and vivid set of essays that not only cast new light on the work of the greatest philosophical provocateur of the late twentieth century but also provide food for reflecting today on the relations among violence, modernity, secularity, and religion.”?Allan Megill, University of Virginia
Publication date
May 20, 2021
Publisher
Fordham University Press
Collection
Perspectives in Continental Philosophy
Page count
296
ISBN
9780823262113
Paper ISBN
9780823262106