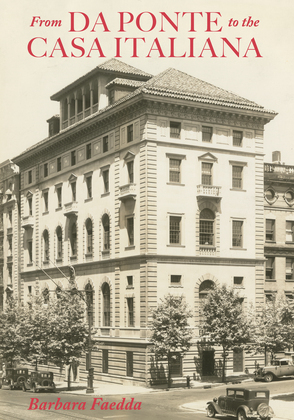 From Da Ponte to the Casa Italiana

The Casa Italiana—a neo-Renaissance palazzo located on Amsterdam Avenue near 117th Street—has been the most important expression of the Italian presence on Columbia University’s campus since its construction in 1927. As a site of interdisciplinary scholarship and promotion of Italian culture, the Casa Italiana has made a substantial contribution to the academic study of Italy in America and the understanding of Italian cultural identity abroad. Celebrating the Casa’s ninetieth anniversary, From Da Ponte to the Casa Italiana documents and recounts the history of the individuals, both Italian and American, who contributed to the formation of Columbia University’s rich tradition of Italian studies.


Barbara Faedda’s succinct yet detailed historical survey begins at the dawn of Italian studies at Columbia with Lorenzo Da Ponte, Mozart’s witty librettist who became the charismatic founder of the New York Metropolitan Opera and Columbia’s first professor of Italian. Covering figures such as the former revolutionary Eleuterio Felice Foresti, Faedda elucidates the complex and often controversial dimensions of the Casa’s history, highlighting protagonists such as the talented but equivocal Giuseppe Prezzolini and Columbia’s president Nicholas M. Butler, as well as Italian-American students and community members. The Casa played a significant role in U.S.-Italian relations from its foundation, and at one point it came under fire, accused of ties to Mussolini and pro-Fascist leanings. Synthesizing archival documents with the work of historians, From Da Ponte to the Casa Italiana tells the compelling stories of the Casa and several of its leading figures, whose influence on the university can still be felt today.