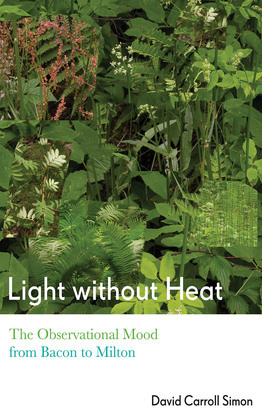 In Light without Heat, David Carroll Simon argues for the importance of carelessness to the literary and scientific experiments of the seventeenth century. While scholars have often looked to this period in order to narrate the triumph of methodical rigor as a quintessentially modern intellectual value, Simon describes the appeal of open-ended receptivity to the protagonists of the New Science. In straying from the work of self-possession and the duty to sift fact from fiction, early modern intellectuals discovered the cognitive advantages of the undisciplined mind.

Exploring the influence of what he calls the "observational mood" on both poetry and prose, Simon offers new readings of Michel de Montaigne, Francis Bacon, Izaak Walton, Henry Power, Robert Hooke, Robert Boyle, Andrew Marvell, and John Milton. He also extends his inquiry beyond the boundaries of early modernity, arguing for a literary theory that trades strict methodological commitment for an openness to lawless drift.