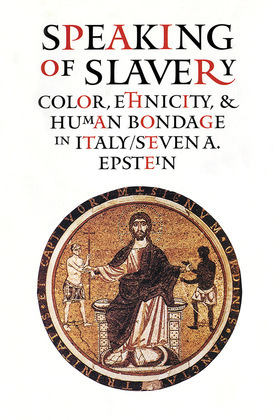 In this highly original work, Steven A. Epstein shows that the ways Italians employ words and think about race and labor are profoundly affected by the language used in medieval Italy to sustain a system of slavery. The author's findings about the surprising persistence of the "language of slavery" demonstrate the difficulty of escaping the legacy of a shameful past.

For Epstein, language is crucial to understanding slavery, for it preserves the hidden conditions of that institution. He begins his book by discussing the words used to conduct and describe slavery in Italy, from pertinent definitions given in early dictionaries, to the naming of slaves by their masters, to the ways in which bondage has been depicted by Italian writers from Dante to Primo Levi and Antonio Gramsci. Epstein then probes Italian legal history, tracing the evolution of contracts for buying, selling, renting, and freeing people. Next he considers the behaviors of slaves and slave owners as a means of exploring how concepts of liberty and morality changed over time. He concludes by analyzing the language of the market, where medieval Italians used words to fix the prices of people they bought and sold.

The first history of slavery in Italy ever published, Epstein's work has important implications for other societies, particularly America's. "For too long," Epstein notes, "Americans have studied their own slavery as it if were the only one ever to have existed, as if it were the archetype of all others." His book allows citizens of the United States and other former slave-holding nations a richer understanding of their past and present.