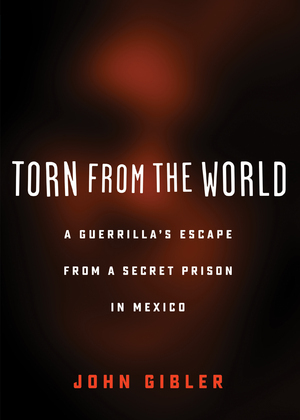 Torn from the World

"The book that most shocked me this year for its literary quality is called Tzompaxtle, although in English it has another title, Torn from the World. The author is John Gibler, a real outlaw."--Diego Enrique Osorno, author of El Cartel de Sinaloa

Andres Tzompaxtle Tecpile was torn from the world. Abducted off the street, blindfolded and beaten, he was brought to a Mexican military facility and "disappeared." Tzompaxtle, a young member of an insurgent guerrilla movement, was subjected to months of interrogation and torture as the military tried to extract information from him. In an effort to buy time to protect his family and comrades, and to keep himself alive, he lead his captors on fruitless journeys to abandoned safe-houses and false rendezvous locations for four months. Finally, faced with imminent execution, he decided to make what he thought was a suicidal attempt at escape; when he miraculously survived, he was able to return underground.

Gleaned from years of clandestine interviews, Tzompaxtle's story offers a rare glimpse into chronic injustice, underground resistance movements, and the practice of forced disappearance and torture in contemporary Mexico.

"At once harrowing and humane, John Gibler's wonderful new book shines a light on the darkest corners of the Mexican justice system. We cannot turn away from what we see there. This is a brave, daring book, equal in every way to the extraordinary life it documents."--Daniel Alarcon, author of The King is Always Above the People

"Once in a long while a brilliant writer happens on a story he was born to tell--a story that in its stark and unremitting horror gives us a glimpse of the world as it is, unvarnished and unredeemed. John Gibler is such a writer and Torn From the World is such a story. A wrenching, astonishing tale, brilliantly told."--Mark Danner, author of The Massacre at El Mozote

"Torn from the World is the product of a thorough investigation and it is written with rage and humility at the same time. This is the work of one of the most important journalists of our time."--Yuri Herrera, author of Signs Preceding the End of the World

"John Gibler's powerful recounting of the forced disappearance of Andres Tzompaxtle Tecpile unearths the brutal machinery of state-sanctioned torture and terrorism in Mexico today. This book must provoke an outcry."--Sujatha Fernandes, author of Curated Stories

"Not since Rodolfo Walsh's classic Operation Massacre have I read a work of political and literary journalism as inventive and urgent as John Gibler's Torn from the World. With courage, empathy, and clear-sightedness, Gibler tackles questions most journalists won't go near.?--Ben Ehrenreich, author of The Way to the Spring: Life and Death in Palestine

"The North American journalist John Gibler not only presents here the guerrilla combatant's story, but also contextualized it within the broader, very troubled history of class relations in Guerrero and the contemporary proliferation of human rights abuses in Mexico, from Ayotzinapa to Ciudad."--Jesse Lerner, author of The Shock of Modernity