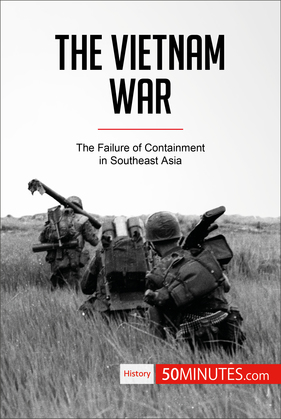 Keen to learn but short on time? Get to grips with the events of the Vietnam War in next to no time with this concise guide.
50Minutes.com provides a clear and engaging analysis of the Vietnam War, a brutal conflict that spanned two decades and resulted in catastrophic human and material losses. After the end of the First Indochina War in 1954, Vietnam was partitioned into two ideologically opposed states, namely the Communist North Vietnam under the leadership of Ho Chi Minh and the nationalist South Vietnam, which soon allied itself with the USA. This resulted in a lengthy conflict characterised by the use of guerrilla warfare which made a quick victory impossible, the intervention, whether covert or overt, of various foreign powers, and the widespread use of chemical weapons, the effects of which are still felt in Vietnam today.

In just 50 minutes you will:
?Find out about the background to the Vietnam War, including the First Indochina War and the Geneva Accords
?Learn about the key events of the conflict, including the Tet Offensive in 1968
?Understand the human and material costs of the war for American and Vietnamese soldiers and civilians

ABOUT 50MINUTES.COM | History & Culture
50MINUTES.COM will enable you to quickly understand the main events, people, conflicts and discoveries from world history that have shaped the world we live in today. Our publications present the key information on a wide variety of topics in a quick and accessible way that is guaranteed to save you time on your journey of discovery.