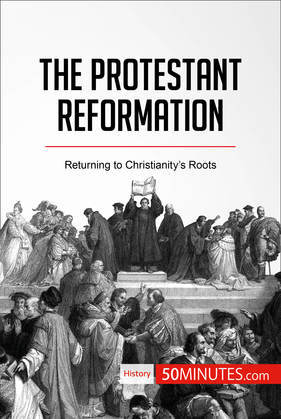 Keen to learn but short on time? Get to grips with the history of the Protestant Reformation in next to no time with this concise guide.

50Minutes.com provides a clear and engaging analysis of the Protestant Reformation, which began in 1517 with the publication of Martin Luther?s 95 Theses. The rest of the 16th century was defined by the resulting religious schism, which pitted the Catholic Church against an ever-growing movement that demanded far-reaching reforms in almost every area of religious life. Several heads of state converted to Protestantism, bolstering the movement, including Henry VIII, who founded the Anglican Church in 1534. However, the Reformation was also beset by internal dissent, and it quickly splintered into a number of different factions, most notably with the rise of Calvinism in Geneva. Even so, its greatest rival remained the Catholic Church, and the next two centuries were characterised by a series of religious conflicts, wars and massacres which lasted until the emergence of tolerance and secularism during the Age of Enlightenment.

In just 50 minutes you will:

?Discover the Catholic practices that the Reformation sought to abolish
?Learn about the differing beliefs of the most prominent leaders of the Reformation
?Understand the conflicts that broke out across Europe in the wake of this religious upheaval

50MINUTES.COM will enable you to quickly understand the main events, people, conflicts and discoveries from world history that have shaped the world we live in today. Our publications present the key information on a wide variety of topics in a quick and accessible way that is guaranteed to save you time on your journey of discovery.