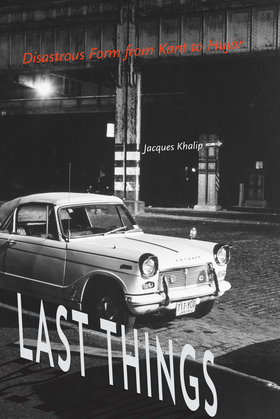 The arrival of the Anthropocene brings the suggestion that we are only now beginning to speculate on an inhuman world that is not for us, only now confronting fears and anxieties of ecological, political, social, and philosophical extinction. While pointing out that reflections on disaster were not foreign to what we historically call romanticism, Last Things pushes romantic thought toward an altogether new way of conceiving the “end of things,” one that treats lastness as neither privation nor conclusion. Through quieter, non-emphatic modes of thinking the end of human thought, Khalip explores lastness as what marks the limits of our life and world. Reading the fate of romanticism—and romantic studies—within the key of the last, Khalip refuses to elegize or celebrate our ends, instead positing romanticism as a negative force that exceeds theories, narratives, and figures of survival and sustainability.