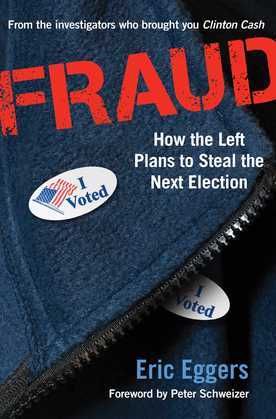 Can an election be stolen?

You bet it can.

The intrepid reporter Eric Eggers has uncovered just how easy it is to cast a fraudulent ballot—canceling out your vote and in some cases deciding elections. We know—despite official denials—that voter fraud is happening. In fact, Eggers shows, it’s rampant, and it’s all over the country.

Worse, many famous civil rights organizations encourage voter fraud and frustrate its prosecution. Every proposed voting security measure and every attempt to enforce existing laws is treated as an attack on the right to vote.

But of course, the real threat to civil rights, free and fair elections, and the rule of law is voter fraud. And in case after shocking case, Eggers shows how voter fraud is subverting American democracy.

In his frightening and thought-provoking book, Eggers highlights:
• How so-called “progressive” organizations promote and explain away voter fraud
• Why voter fraud is a growing threat—and tied to illegal immigration
• How swing states in national elections could be swung by voter fraud