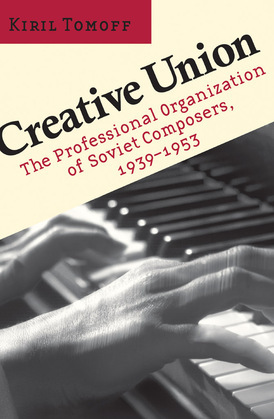 Why did the Stalin era, a period characterized by bureaucratic control and the reign of Socialist Realism in the arts, witness such an extraordinary upsurge of musical creativity and the prominence of musicians in the cultural elite? This is one of the questions that Kiril Tomoff seeks to answer in Creative Union, the first book about any of the professional unions that dominated Soviet cultural life at the time. Drawing on hitherto untapped archives, he shows how the Union of Soviet Composers established control over the music profession and negotiated the relationship between composers and the Communist Party leadership. Central to Tomoff's argument is the institutional authority and prestige that the musical profession accrued and deployed within Soviet society, enabling musicians to withstand the postwar disciplinary campaigns that were so crippling in other artistic and literary spheres.

Most accounts of Soviet musical life focus on famous individuals or the campaign against Shostakovich's Lady Macbeth and Zhdanov's postwar attack on musical formalism. Tomoff's approach, while not downplaying these notorious events, shows that the Union was able to develop and direct a musical profession that enjoyed enormous social prestige. The Union's leadership was able to use its expertise to determine the criteria of musical value with a degree of independence. Tomoff's book reveals the complex and mutable interaction of creative intelligentsia and political elite in a period hitherto characterized as one of totalitarian control.