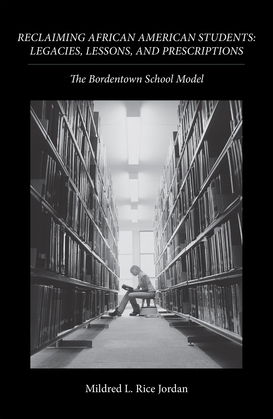 This book gives an intimate look into the history of an African American National Historic Site that was located in Bordentown, New Jersey. It was known by many names: Manual Training and Industrial School for Colored Youth; M.T.I.S.; or the Tuskegee of the North. Most commonly, however, it was called just the Bordentown School.

Bordentown was founded in 1886 by an ex-slave, Walter Allen Simpson Rice. Afer serving in the Civil War, Rice came north and became affiliated with the African Methodist Episcopal Church (A.M.E.). Seeing great promise in him, the church sent him to seminary to become a minister.

Rice dreamed of uplifting his people but had limited resources with which to make his dreams a reality. However, he did have great faith in God, and his faith inspired him to start a boarding school. With only eight colored students he began his school in an old frame house. He did not live to see this school become one of the nest institutions of learning for colored high-school youth in the northeast. However, Reverend Rice and the principals who followed him have legacy behind a legacy which has invaluable lessons and great potential for developing educational prescriptions which will, at their foundation, give all black students a culturally affirming, culturally relevant education.

This book clearly states that no matter how complicated and technologically sophisticated our Society becomes, the Bordentown Schools philosophy, policies, and practices can still be a model which can be adapted for Reclaiming African American Students in the 21st Century.